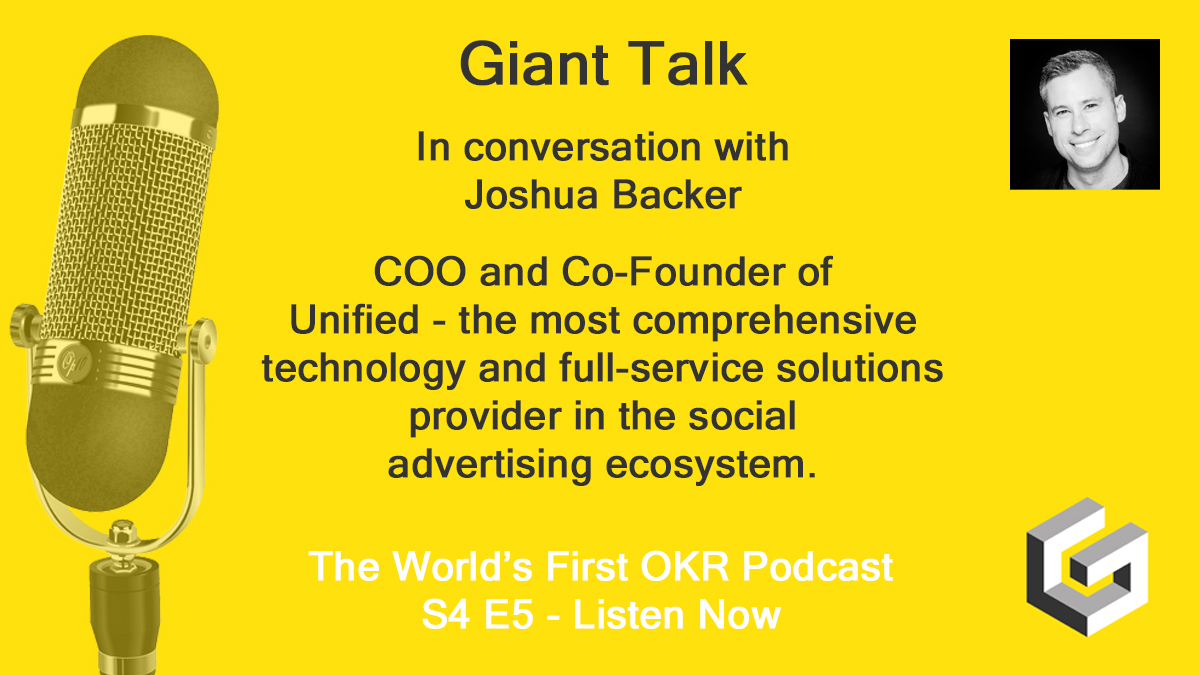 In this week’s episode of Giant Talk – the world’s first OKR podcast, we talk to Joshua Backer of Unified. Unified are a social advertising technology and services company and were one of the earliest partners for Facebook, twitter, Snapchat, LinkedIn and Pinterest.

Josh talks about his and Unified experience with OKRs and why they chose a different path.

Lawrence: Hey everybody, hope you’re all well. Welcome back to Giant Talk – The world’s first OKR podcast. It’s a lovely cloudy day here in Manchester, but hopefully we can brighten your days up a little bit, because today I’m joined by the rather impressive Joshua Backer from Unified. Hi, Josh.

Lawrence: How’s it going for you guys over there?

Josh: It’s going well on the other side of the ocean. But we happen to have the same weather as you today.

Lawrence: Really? And where you guys based again?

Lawrence: Okay, so tell us a bit about yourself, Joshua.

Josh: Um, I’ve been an entrepreneur for the last 12 years or so. Started a handful of companies. The 1st 3 were just myself and a co-founder. Um, and they did not last for more than 12 to 15 months each, had some exits in there, some ones chalked up in the loss column, but the current company, Unified has been around a little over eight and a 1/2 years and has grown to over 100 employees. So, it’s a much different scale than we’ve experienced in the past, and it’s been quite a ride.

Lawrence: So, you must have got a secret formula right on this one then? Then

Josh: We got something right.

Lawrence: And what did you do before you were starting companies here, there and everywhere?

Josh: I was in graduate school for a PhD in comparative literature.

So kind of an odd route to getting into technology startups, but makes a little more sense when I say that the first start up that me and my co-founder started was in the education space and technology had always been a hobby, and I was being professionalised into academia. So, my experience was actually fairly applicable to the first started that we started.

Lawrence: Fantastic. Ok, tell us a bit about unified, then. They are eight and 1/2 years old, you at the helm. But what do they do?

So, we were one of the earliest partners for Facebook. Twitter, Snapchat, LinkedIn and Pinterest as they rolled out their programmatic advertising ecosystems, we were one of the first technology partners and service partners essentially a gateway onto these platforms for marketers and agencies.

Josh: Interesting. So, I mean, eight and 1/2 years ago, you must of been right front and centre of the game then.

Josh: Well, yeah, yeah, exactly. One of our earlier companies was building Facebook applications and helping app developers on Facebook monetise their application after we had figured out how to monetise our own. So, we have been in the space for a few years before they formally ah, the technology platforms that is, formally created there ads ecosystems as we know them today. There was a little Wild West before that, but, you know, once they were able to put their own technology in place, you know, obviously they’ve capitalised on it to a rather large degree with Facebook, really leading the pack. But, you know, the other is doing quite well as well.

Lawrence: Yeah, so I mean, you must have seen an incredible evolution over those eight and 1/2 years, and not only of the platforms, but of, like you say, moving from a Wild West style to something a bit more formal regulated, even.

Josh: Exactly. You know, we were one of the first players and it took a little time, but, you know, we’re seeing all the old players move into the space as well. So, the types of challenges have certainly changed. We’re competing against a different set of companies. Ah, the opportunities for us to create value have changed. We’ve really had to evolve along with it.

Lawrence: Sure. Okay. So, I mean, is this what led you to start seek a new sort of strategy framework, then?

Josh: Yeah. Yeah, it definitely is.

You know, we found ourselves really making rather substantial changes, every 18 months or so, and within that in order to capitalise on, changing opportunities in the industry or challenges of threats. Um, and within that 18 month period, you know, we really needed to have a focus strategy in a way of measuring how we’re executing against that strategy.  You know, it is really taking a long time to discover and set a lot of framework that has served us well over maybe the last, uh, 18 months or so.

Lawrence: Okay. Interesting! And you are unique as one of our guests on this podcast really. As the only person who didn’t settle on OKRs in the end? I think. So, do you want to tell us about which of these frameworks you did decide to go with and why?

Josh: Sure, sure. So, we ended up going with the balance scorecard framework. OKRs we tried to implementing several years ago, maybe 4 or 5 years ago. And I think there’s just a lot less written about them then, it was more of a mystical art. I would say than it is today where there are a lot of frameworks and a lot of resources to support it. And we tried to implement it in a very, um, hierarchical way and very rigid way that had every layer of the organisation’s OKRs interlocking with each other. And so, you know, it was a classic example of it just taking, you know, half the quarter to implement. OKRs for the quarter being measured because everything was just cascaded down from the top. Um, and, you know, it certainly did not help with adherence for a young company, you know, full of people who you know are early on in their careers that were, ah, you know, encouraged to be experimental. You know, that type of rigidity just didn’t last. So we had a spectacular failure with that after a couple quarters and then, you know, we just kind of held it together for a few years, frankly, in terms of applying our strategy to objectives across the company. And then about 18 months ago, you know, we came upon the bound scorecard framework and a few of us in the organisation independently had been digging into it and then we came together. So folks from, HR, Project Management, myself sitting in the COO office came together and decided to really embrace the bounce scorecard framework.

We really liked it because as opposed to OKRs when we tried to implement them. The bounce scorecard framework has been around for a long time. There’s a lot of documentation around it. It really provided a scaffolding that was very clear about us where we could really plug in our objectives as a company and the goals and the metrics we would need to put in place in order to achieve those objectives.

Lawrence: Right? Okay. Interesting! So, it was the fact that it has a bit more history behind it that gave you the confidence that maybe that would be a better one for you guys.

Josh: Yeah. Yeah, I would say so. The structure is a little more straightforward than OKRs I think. You know, the two components are strategy map, and then the scorecard itself, and there are tonnes of templates and resource outlined where you can just print out a strategy map, print out a scorecard, Um, and just, like, plug in your objectives and they fit together in a very logical way. How you want to measure them.

So, for us it took a lot of the cognitive load off of figuring out how we put this together and how we explain it to the organisation and how we align other parts of the organisation to the corporate level strategy map and corporate level Balance card. Whereas OKRs is a little bit more fluid. You have I think a little more decisioning to make if you’d like. Balance Scorecard kind of cuts that out and just, you know, gives you a road map.

Lawrence: Yeah, you’re absolutely spot on. And, you know, that’s why, hey, I mean, that’s what the reasons we decided to make this podcast is because one of the issues with OKRs is It’s pretty hard to replicate in your own business just by say reading, a book or doing the research online.

Josh: Yeah. Yeah, I read Measure what matters. I thought it was fantastic. And frankly, a lot of the concepts from Measure What Matters informed how we implement Balance Scorecard. You know, I think you know the scorecard component of the Balance Scorecard. You know, I think has a lot in common with the conceptual framework of OKRs. In terms of how you think about incremental steps, adding up to larger outcomes. And the frequency of monitoring quality versus quantity. You know, it all it all can be applied to either framework. So actually I did find that book written by John Doerr to be incredibly helpful. Um, as we’re implementing Balance Scorecard. Ah, you know, the framework was just a lot easier for us.