Talking OKRs down under 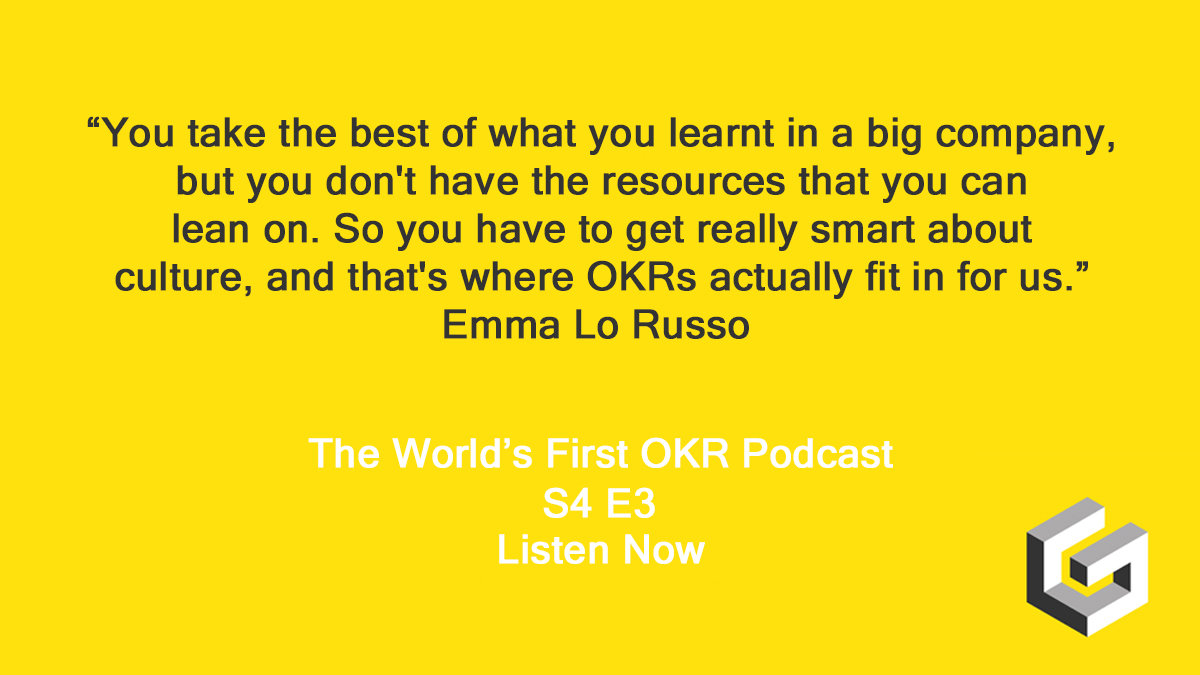 Today we talk to Emma Lo Russo of Digivizer all the way from Sydney Australia. Emma co-founded Digivizer in 2010 with her business partner Clinton Larson. In today’s podcast we talk about Digivizer, the growth of the company and OKRs in Australia.

Lawrence: Morning everybody welcome back to Giant Talk – the world’s first OKR podcast. This week I’m delighted to have joining me as a guest Emma from Digivizer. Welcome Emma.

Emma: Thank you for having me. I’m happy to talk to you.

Lawrence: No problem at all. So, well this week we’re going to talk about how to get slick with OKRs really aren’t we? It’s going to be all about retrospectives and things you can learn along the way, and the journey that Digivizer have been through.

Emma: Yeah, we’re now probably three and a half years in since we implemented them, so we’ve learnt a lot along the way.

Lawrence: Wow, so you guys are pretty early adopters then? You’re going to have some great lessons to share.

Emma: Haha and modified along the way as well.

Lawrence: Of course, that’s super important. That’s one of the most important parts. So, tell us about yourself Emma then, what’s your background? Then we’ll talk OKRs in Australia.

Emma: So, I’m founder and CEO of Digivizer. We founded in 2010, prior to that my background was in corporate, originally in marketing but prior to Digivizer I was President and Chief Operating Officer of an ASX listed electronics design software company worth about $4.5billion market cap. 97% of our revenues earned overseas within electronics design software, so it was all at that time around the internet of things and smart devices that were going to come into play. Through that insight of travel and watching what was going on and really seeing the adoption of smart devices and mobile in a complete removal of this notion of fixed desk working and bricks and mortar stores when you’re going, in-particular into Asia. I was like ok, everything is going to be on the mobile phone, the digital footprint of people, how can we. If we use this as my opportunity to create a company which was meaningful for companies so they can better acquire their customers. Taken from a they don’t know you to a consideration conversion and loyalty. So, that’s what Digivizer was. It started on the enterprise side, building our own technology in the social media and search space, which has then gone into web and then most recently launched that as a technology platform for businesses everywhere as a SAS and a lower cost way of getting in, but having that same insight and all the learning since 2010. Erm, so we’re in 12 countries now. 40% of our revenues are earned overseas and we’ve got 50+ employees round the world, so it’s been an interesting journey since 2010.

Emma: It’s been a wild journey and you know, it’s funny, you go from corporate to starting your own business and it’s, you take the best of what you learnt in a big company but you just don’t have the resources that you can lean on, so you have to get really smart about culture, and that’s where OKRs actually fit in for us. It was like, how can I develop a high performance culture where everyone knew what we were working towards, but in a framework that meant that it was easy to deploy being a much smaller organisation, and you know, distribute it around the world. We needed to find a framework that could create this common language and a way that everyone can contribute and measure and know that they were being successful and really feel like they were part of it.

Lawrence: Interesting. So, when you first came across OKRs then, were you actively looking for a solution to some of these issues, or did you stumble across OKRs and think a-ha this could work for us?

Emma: I guess it was probably more just a stage of growth and it was just at the end of 2015 coming into 2016, and really acknowledging what had built our company and got us from start-up to that stage wasn’t going to take us into the next stage of growth. You know, I’m very keen about building a very successful global company, and, you know that is recognised in the same breath as the technology greats. So, for me this was not a small thing, I needed to find a way to be able to frame that. I’m a ferocious reader and podcast listener and I was just trying to get my hands on anything of, how did technology, successful companies scale, and what was some of their key moments and what were the tools or the processes or the decision making. Like, what drove that and I came across a book called Radical Focus and that was when I first understood the OKR framework and thought, OK, this is it. I think we can use this as the vehicle.

Emma: Yeah! And, it was great. And you know, I didn’t implement it exactly as they said, but I loved their very clear key results. It’s a very succinct way to build the business, and that cascades from the business all the way down, so every individual understands those three. We communicate, we measure – it becomes the language. That then breaks down from the year to the quarter and it really has helped us grow and it’s been the framework we’ve continued to build from – there’s not a person here at Digivizer that doesn’t know what they are or wouldn’t be able to communicate to you what OKRs is meant to our organisation and to them.

Lawrence: That’s fantastic! So, how many people did you have in your team when you first implemented them (OKRs)?

Emma: So back in 2015/ 2016 we were probably about 30 people, maybe. And as I said we’re 50 plus now. So, it was a smaller team to put in, but I knew it was important because of the next stage of growth that we were going through and the fact that we wanted to expand globally. There had to be a way that we could get this single, bloody minded focus on what we were set out to do and what were our key measures, so we had all the smart people that we’d hired all working towards one clear outcome that broke down into the three OKRs.

Lawrence: And, how have you found keeping up the momentum with OKRs whilst bringing in new staff?

Emma: So, everyone gets on boarded into, so we break them down to quarters. They live every quarter for people in the sense that, the way we now do it, we used to do active retrospectives with the team. We’re too big to do that now, so we do that through a survey form, but we share the results in a 100% transparent but anonymised way so everyone sees how everyone is feeling about them and it’s really like, what did we do well, what didn’t we do so well, what can we do differently, how connected did you feel towards them, and then your own personal. Because we set them at the company and the personal level. And that seems to work best and then it’s the same sort of questions and then we kind of do our ultimate measure. How happy are you out of 10, how likely are you to recommend Digivizer to someone else, how likely are you to bring a customer or an employee in, and then how likely are we to hit our vision – what we are actually setting out to do. That to me sets the real pulse of our OKRs successful and maintaining a high belief culture that believes we’re working on the things that are going to help us be successful. That again gets shared in a really transparent way back to them team.

Lawrence: Yeah, I mean transparency is vital in the success of OKRs. What’s the team’s attitudes towards OKRs?

Emma: To be honest, I think it is always about getting that balance right. If they’re too easy then there is no challenge, if they feel too far away then they aren’t attainable. There needs to be a balance, some we stretch for, there might be some we miss. But, based on those pulse checks, those measures I was talking about, we score universally on every measure over 7.5 out of 10, which is higher than other organisations for a pulse check the same type of culture and general employee happiness questions. But, in terms of the belief of the company to be able to get there, that sits well over 8.5. So, for me that’s a reflection that the way we go about doing our business, not just where we play, is one that they buy in on.

Lawrence: So, how did you originally go about implementing them then. Because it sounds like you’ve done a very good job of the change management process, because there are companies who we talk to who have got this bit wrong and it’s a really crucial part. Because if you get this wrong, OKRs become a mandate to process coming down from the CEO of the company and it’s just another tick the box exercise, they don’t really believe in it. What process did you undertake for the implementation?

A fascinating first 10 minutes from this week’s podcast conversation from Giant Talk. Follow the rest of the conversation here and subscribe for future Giant Talk episodes.